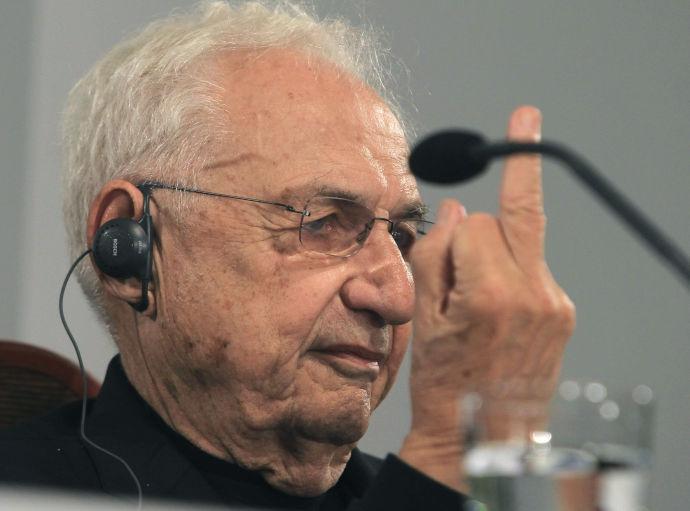 Last Thursday, Frank Gehry raised a middle finger to a journalist in Oviedo, Spain, where the architect of the Guggenheim Bilbao, and of the Louis Vuitton Foundation museum (dubbed “the glass cloud” by admirers), just opened in the Bois de Boulogne, in Paris, was being honored with the Prince Asturias Award for the Arts. He had been asked, at a news conference, to comment on a view that his designs are mere “spectacle.” The bird flipped.

“Let me tell you one thing,” Gehry said, according to the Guardian: “In this world we are living in, ninety-eight per cent of everything that is built and designed today is pure shit. There’s no sense of design, no respect for humanity or for anything else.” He added, pleading, “Once in a while, however, a group of people do something special. Very few, but God, leave us alone.”

I’d like to think that Gehry’s vertical digit consciously mimed the shape of today’s predominant urban architectural style, if “style” even applies to, say, the insolent ninety-six-story shaft of 432 Park Avenue or, for that matter, the botched opportunity of the Freedom Tower, which makes the lost, banal Twin Towers seem a very Parthenon in retrospect. But Gehry quickly and humbly apologized for the gesture, citing jet lag and a “bad moment.” He is eighty-five years old.

So the fury of Frank’s finger passes to those of us who have been benumbed by today’s proliferating, meaningless urban menhirs—street after street a corridor of dead souls. The wealth that builds them can’t be bothered even to symbolize its pride. The buildings say nothing about what goes on inside them or what anybody might feel about it. We live in a dark age when the most nearly eloquent new structures are boutique condos—popping up mushroom-like in Brooklyn—which at least express kinds of niceness that money can buy.

You may or may not believe, as I do, that the Guggenheim Bilbao is the best building of the last half century: indeed spectacular, differently so from every outer viewpoint, but embracing when you enter, and modulating gracefully from sculptural bravura to fine rectilinear spaces for displaying works of art. Most architects seem to disdain artists. Gehry cherishes and learns from them. There’s a palimpsest of modern-art history in the titanium, limestone, steel, and glass composition. Purists deplore such casual detailing as the loose joinery of the titanium cladding. But must the God that is in a building’s details be a martinet? How about a deity that apparently rather likes us—humanly imperfect—as we are? That seems to be Gehry’s creed.

Why anyone would gainsay efforts as generous as Bilbao and, judging from photographs, the Vuitton museum, or would ambush, with a nasty question, the man who made them beggars comprehension. I mean, compared to what, people?